Enns, the oldest town of Austra

Cick here to visit the Official web site of Enns

The first settlements in the area of the mouth of the Enns river to the Danube date back to 4,000 years ago. Celts settled the land around 400 BC. Their kingdom of Noricum was incorporated into the Roman Empire in AD 15 and was designated as a Roman province under the reign of Emperor Claudius in AD 45.

In the second and third century, the Roman camp of Lauriacum, in which up to 6,000 soldiers were stationed, was located on the site of modern Enns. The adjacent settlement (today: Lorch) received the privileges of a municipium in 212 from Emperor Caracalla. At that time about 30,000 people lived here.

About 900, the Enisiburg castle, later Ennsegg Palace, was built on the Georgenberg hill to serve as a protective fortress against Magyar invasions. The surrounding settlement prospered from the 12th century onwards, when Ottokar II, Margrave of Styria established a market here.

During the Diocletian Persecution of Christians, a commander of the Roman army, Saint Florian, died as a martyr at Lauriacum on 4 May 304, when he was drowned in the Enns river. Only nine years later, the Emperor Constantine I proclaimed religious tolerance with the Edict of Milan. About 370, an Early Christian basilica was built on the remains of a Jupiter temple and Lauriacum was the see of a bishop until 488. The present St Lawrence's Basilica at Lorch was built in 1344 on the foundations of the old church.
During the times of Germanic tribes threatening Lauriacum, Saint Severin of Noricum was active in the area. 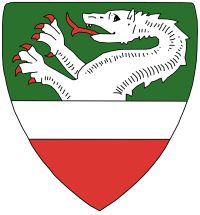 In 1186 the Georgenberg Pact was signed, an inheritance contract between Ottokar IV, Duke of Styria, who lacked a male heir, and the Babenberg duke of Austria, Leopold V. Following the death of Ottokar IV in 1192, his Duchy of Styria — then significantly bigger than the contemporary state, reaching from present day Slovenia to Upper Austria — fell to the House of Babenberg. Thus, Enns became Austrian.

As Leopold VI, Duke of Austria, endowed Enns with town privileges in 1212, it is now considered Austria's oldest town (apart from the Roman municipal status).
Information about the 800th anniversary

Based on the promising and positive reports of German CITTY SLow communities (e.g. Hersbruck or Waldkirch), Enns started the process of becoming a CITTA Slow itself in 2006.

Cittaslow is a movement founded in Italy in October 1999. The inspiration of Cittaslow was the Slow Food organization. Cittaslow's goals include improving the quality of life in towns by slowing down its overall pace, especially in a city's use of spaces and the flow of life and traffic through them.[1] Cittaslow is part of a cultural trend known as the Slow movement.

Cittaslow has expanded broadly beyond Italy. By 2006, national Cittaslow networks existed in Germany, Norway and the United Kingdom. By mid-2009, fourteen countries had at least one officially accredited Cittaslow community. In July 2009, the small seaside village of Cowichan Bay in Canada became the North American continent's first Cittaslow town.)